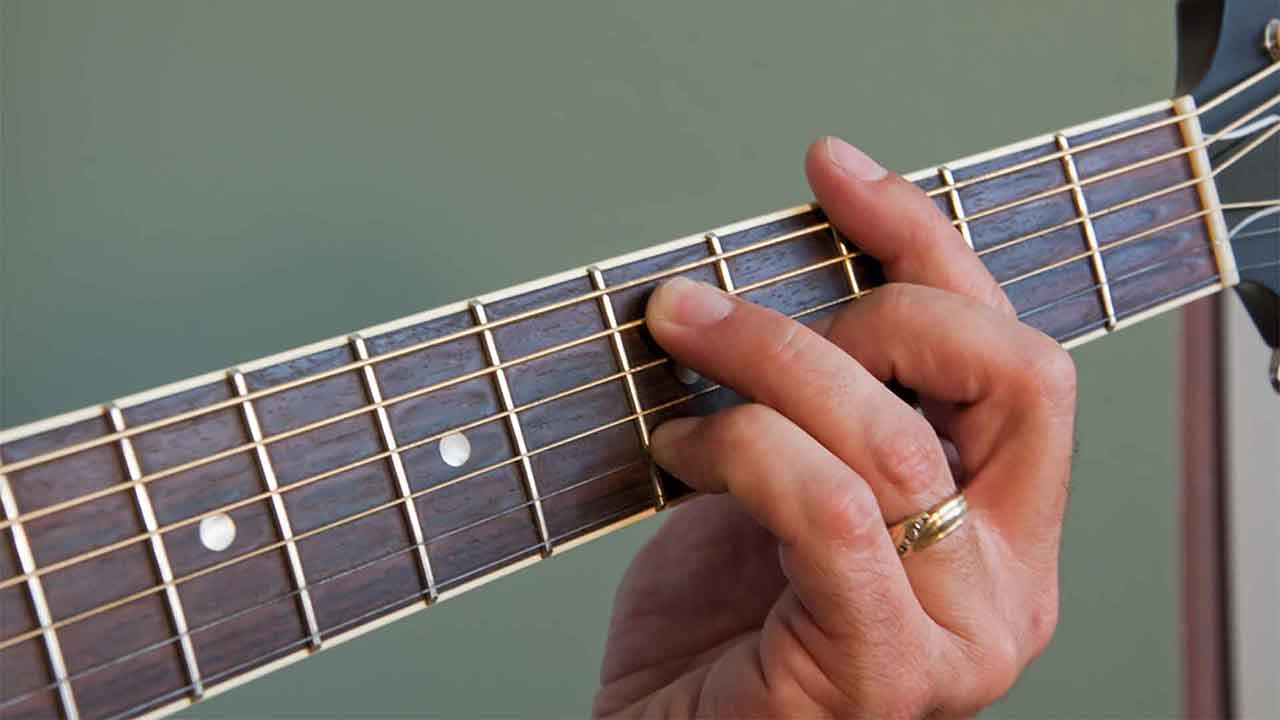 How to Play Basic Guitar Chords (A Full Guide)

Guitar chords are the most important thing any beginner could learn.

And in this guide we’ll show you the most used ones in a LOT of music you probably know.

Just remember, practice your fretting- you want your fingers to firmly hold down each individual string without hitting other strings.

The best way to learn guitar from A to Z

How to Play Guitar Chords for Beginners

Remember the notes on the guitar (thickest to thinnest string):

Now each of these notes is also going to get a number – from 1 to 6. The bottom E (highest pitch note + thinnest string) will be #1. The lowest pitch note and thickest string (top E) will be #6.

The frets on the neck are also going to get a number – the first fret (Fret 1) will be the one closest to the nut of the guitar (mind out of the gutter, people…) and go downwards. The nut is what you could call Fret 0 and sits right on the border of the head and neck.

We’re also going to be numbering our fingers (except your thumb):

The notes that make up a basic C Major?

Now press down those strings and play each note (except the two you’re not supposed to play) one at a time. Sound off or kind of weird? Don’t worry, it happens. Check your fretting hand – are your fingers pressed down firmly and in the right place?

You may have to twist and curl your fingers in positions that feel awkward at first to get a good sound, but you’ll get used to a comfortable position over time. Play them again – sounding better? Good. Now strum the strings from top to bottom, all together.

VIDEO: How to Play Guitar

How to Read Diagrams

So when you’re looking for songs to play online, you’ll often come across something known as tablature or “tabs” for short. You’ll also see something called “chord charts.” These are guitar chords diagrams that show you what notes and chords to play for a particular song or progression. Remember the finger, fret and string numbering we mentioned above?

If not, here’s a diagram to help jog your memory:

Basically a diagram or a tab will tell you what strings to press on what frets using which fingers..

Here’s what you’ll notice when you’re looking, for example, at the C chord diagram:

And that’s how you read guitar chords diagrams.

4 Most Common Chords on Guitar

There are so many potential guitar chords (and voicings) you could play. But you don’t have to worry about ALL of them. Focus on the basics and then move on. Slowly but surely your chord vocabulary will gradually increase.

To start things off let’s go over the 4 most basic (and most common) ones you’ll ever come across.

Some of these are known as “open chords” – they’re straight forward and easy to play. And if you know them, you can play a hell of a lot of popular music.

Below you’ll find a description of how to play it along with a chart diagram of how it’s played. If you need, brush up on the basics of playing guitar.

If you’re looking for more advanced types, we recommend checking out these great online guitar training.

The C major is the most common chord ever – and pretty much every music student starts with it, whether they’re learning guitar or piano.

It is made up of the C, E and G notes and is the root chord of the C Major scale. (Learn guitar scales here!)

Your first 3 fingers form a sort of staircase. Just be sure not to play the 6th string when you strum.

It’s made up of the D F and A notes and your fingers make up a triangle.

You’re only playing the first 4 strings with this chord. Take a look at the diagram below.

With the G major chord on guitar, we start to twist our fingers a bit more.

It’s a kind of claw shape, which can make it hard to switch from another chord to this one, but you’ll get used to it.

This time, you’re going to strum all of the strings. There are no strings left out even though the root chord only has the 3 notes G, B-flat and D.

Check out the diagram below:

The F major is another open chord that’s often one of the first you’ll learn.

A lot of times you’ll start by practicing switching between the C major and the F Major, because of some similar finger placements.

On this chord, we’re adding an additional string being held down (using a single finger, no less).

Try it out with the aid of the image below.

Now let’s round out our list with a couple more major guitar chords. Majors are the happier sounding chords, and are often used in pop music.

The A major is probably the easiest thing to play ever. It doesn’t take a lot to remember these finger positions.

You’re able to “barre” three of the strings on the same fret. Barre chords are a specific type you can learn more about below or in our full how to play guitar guide.

Rounding out our list is the E Major. It’s an open chord and each string of the guitar gets played when strumming this particular shape.

Remember, with this chord you’re going to let all strings ring out on the strum.

Even easier than the last one!

Now that you have a bunch of major quality chords you can use right away, let’s talk about minor keys.

Minor chords are ones that sound more melancholy or “sad.”

This is VERY similar to the E major you learned above.

All you have to do is make that same shape and move each finger down one string.

The only real difference you need to be aware of is the 6th string (thickest guitar string) doesn’t get played .

Check out the diagram:

The E minor is probably one of the easiest guitar chords you’ll ever play. You only use 2 fingers.

In fact, it’s exactly the same as the E major, but without one of the fingers.

All of the strings get strummed this time for a nice full sound.

Now let’s move onto the D minor. Again, this one is similar to it’s major counterpart with one minor adjustment.

You just have to move one fret position.

Check out the diagram below:

The last one we’re going over – the B minor – isn’t exactly an open chord, but it’s still a really commonly played guitar chord.

However, it’s also one of the most difficult for beginners to play because it’s usually shown with a “barre” on the 2nd fret.

But we’re going to show you an easier version below.

Here’s what you need to know:

And that’s that – chords every beginner needs to know. Of course, there are many more you’ll want to learn, but before you try to move on master these basic ones first. Once you can play them all without problems, you’ll be ready to tackle different voicings and more advanced options.

For now here’s a quick intro to another type of chord that is important to know as a guitarist.

If you’ve brushed up on basic music theory, you’ll know there are Major chords (“happy” sounding) and Minor chords (“sad” sounding). Well, there are a bunch of other types too. There are so many note combinations it’d be impossible for us to list them all right here in this guide.

So make sure you download our free practice plan and “cheat sheets” below. One thing we should mention, though, are Barre (or “Bar”) Chords.

The way they’re fretted make it easy to move between chords.

It’s where you basically use your index finger to press down ALL the strings on a fret, (example the first fret) then the rest of your fingers make the shape of an E Major underneath the index finger.

That will let you play an F Chord.

That shape (excluding finger 1) is an E Major if you were to play it starting on fret 1 instead of fret 2. Now… If you keep that same shape with your fingers and move your hand down so Finger 1 is now pressing down ALL strings on fret 2, the chord becomes a G. And so on… The Ramones used a lot of barre chords, pretty successfully too! So practice some yourself!

Why Should I Learn Guitar Chords?

Chords are an important part of music. They provide the emotional vibe of a song. Knowing how to play chords on the guitar allows you to form a harmonic basis to a song. The harmonic basis of a song is how the emotion flows and moves – are you playing a happy song or a sad song? The chords you choose here will make the difference. You should learn chords, so that you are able to play songs and even write your own music.

Why Does My Guitar Buzz When I Play a Chord?

The most common reason for a buzzing sound when you play a chord on a guitar is that the strings are not being “fretted” properly. That means you’re likely not pressing down hard enough on the strings on your fret hand. It may also mean that you’re pressing down on a string too far away from the actual fret. Make sure your nails are trimmed low and you’re using the top pads of your fingers on each string you’re trying to press. Press down hard and make sure you’re not accidentally touching any of the strings you’re not supposed to fret.

What Are Guitar Chord Inversions?

An inversion simply means playing the notes of a particular chord “out of order.” For example, a chord is normally derived from the first, third and fifth note of a scale (in that order). So you’d play the notes in the order 1-3-5. An inversion of that guitar chord would be, for example, playing it as 3-5-1 or 5-1-3. It’s the same chord being played, but since it’s been “inverted” it’s got a distinct sound to it from the original “root” shape of the chord

What Are Guitar Chord Shapes?

When you play certain chords on the guitar, you’ll notice that your fret hand fingers are making a certain shape. Some of these shapes can be “transposed” (moved up or down the guitar neck) to play different chords. You’d simply leave your fingers in the exact formation they’re currently in (the “shape”) and move it to another string or another fret position and it’d form another chord.

Now that you know these guitar chords for beginners, make sure you download our free cheat sheets (see above) for even more charts/diagrams you can start playing today!

And that’s it! Make sure you keep practicing as often as you can – daily is best.

Thanks for reading our complete guide on how to play basic guitar chords. We hope you found it helpful.

Back to Main Guitar Section