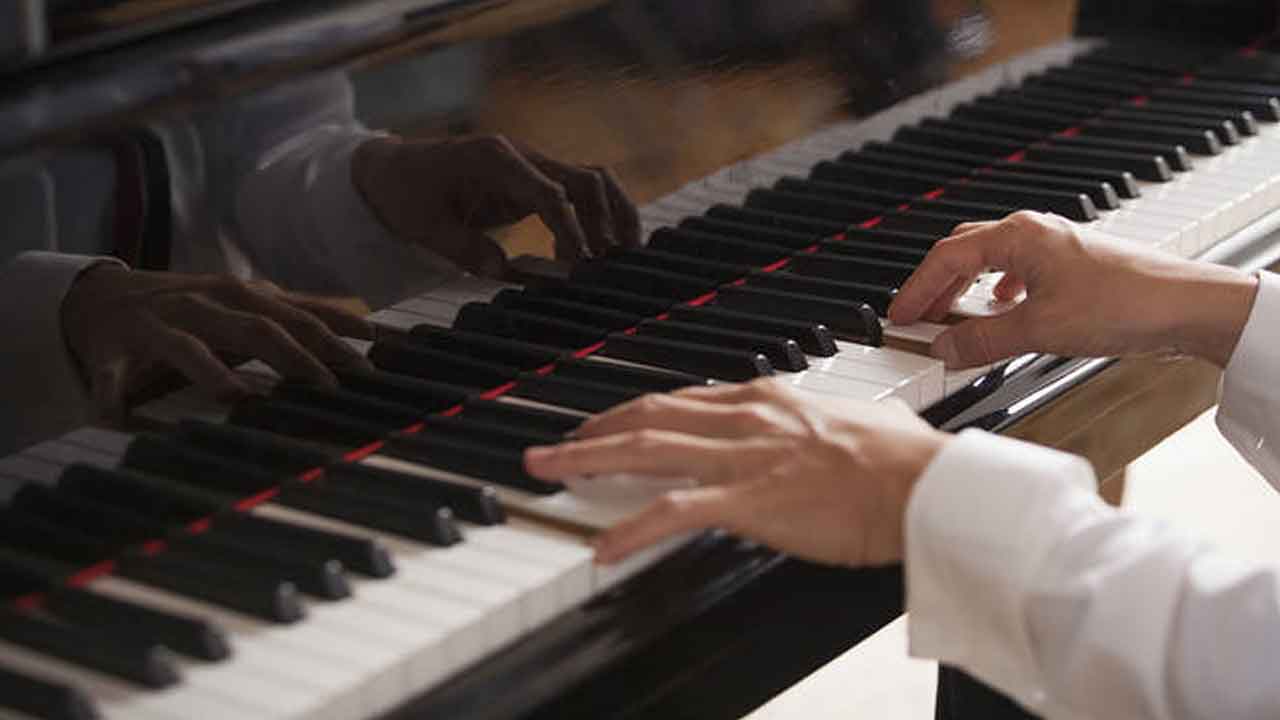 Piano Chord Progressions – Everything You Need to Know

Learn the most popular chord progressions on the piano.

In this guide, we’re going to take you through the most popular piano chord progressions. Then we’ll give you tips on writing your own unique progressions.

If you haven’t already read our beginner’s guide to playing the piano, please read it first.

To follow along with this guide, you’ll need to know about the number system, scales and how to put together chords on the piano.

First, you need to understand the rules of basic diatonic harmony. Here’s a quick refresher for you (full guide below).

If you’re really interested in chord progressions and concepts of harmony, though, you should consider taking some structured online piano lessons. They’re just able to get into things in a much more in-depth way.

If you understood the “quick refresher” above you can skip this section.

When you’re first starting out with playing chord progressions, it’s important to know about diatonic harmony. That’s just a fancy phrase that means “in a particular scale, these are the chords you should use for each note in the scale.”

Chords in a Major Scale:

What’s that mean? If you’re in a major scale, the 1st note is a major chord, the 2nd and 3d chords are minor, notse 4 and 5 are major, while note 6 is a minor. Note 7 is a diminished chord.

So if you’re finding a chord progression in C Major, you can use the following chords together and they’ll sound good together:

Chords in a Minor Scale:

So in C Minor the chords you can use are:

Try playing those chords one after the other. You’ll notice that they sound like they fit together. That’s the magic of diatonic harmony. Once you become advanced, you’ll be able to dip in and out of various scales to form complex chord progressions.

There are a bunch of different combinations of chords you could use to build a progression – it’s limitless. But there are a few common ones that you should be familiar with.

Now that you know how everything works, here are the most common chord progressions you’ll hear in western music. We’ll give you the structure of the progressions below, but you’ll have to pick a scale to play in and figure out the proper chords yourself! All of these can be played in any key on the piano.

Popular Chord Progressions on the Piano

There are a few more piano chord progressions that you’ll find used in music over and over again – because they work. We’ll go over them in this section.

But they aren’t the only ways to put chords together. They’re a great starting point, but always experiments with rhythms, chord qualities and chord voicings to put your own twist on them.

Once you’re comfortable with these progressions, you can try creating your own with our advanced tips below.

Other Common Chord Patterns on Piano

Experiment with both major and minor keys with the following chord progressions.

Notes: bVI means the FLATTENED VI chord. I/iii means to play the I chord with a iii note as the bass

A circle chord progression is one where each successive chord seems to naturally flow from the previous chord.

Try them out for yourself:

Pick a scale (like C Major) and practice the above piano chord progressions – you’ll quickly notice that you’re basically playing music! Hell you could even sing over top of a simple chord progression like the ones above, and be done with your very own song!

One important (but advanced) idea we should mention on the topic of chord progressions is voice leading when you’re transitioning between chords. Basically, you want to minimize the movement between chords so everything sounds nice and smooth, instead of jarring. You do that by using common tones across your chords What’s that mean? Say you want to play a I-IV-V-I in C Major. Here are the chords you’d play in root position:

If you play that on your piano, you’ll notice that your hand has to move a pretty long distance between chords.

We want to minimize that movement. So what do you do? We use chord inversions and different voicings to play chords in a way where our hand doesn’t have to move around much. So let’s use C Major in root position and play F Major in 2nd inversion and G Major in 1st inversion.

Note: the B in B-D-G is played below (to the left) of the C note you’re playing. So essentially, you’re only having to move a couple of fingers to get from chord to chord. That’s voice leading. And it’s glorious.

Tips for Writing Your Own Chord Progressions on Piano

It’s always great to work with a pre-set starting point, like with the common progressions we went over above.

But sometimes, it can be fun to come up with your own, completely unique chord patterns.

So here are some basic tips to help you work through the writing process.

Use a Key You’re Familiar With

If you’ve memorized all 24 scales on every key of the keyboard, you don’t need to worry about this one.

But if you’re just starting out, when you’re writing a progression start in a key you’re familiar and comfortable in.

For most beginner’s that’ll likely be either C Major or A Minor (all the white keys).

It’s ok if you want your progressions to be in other keys. Once you’ve written it, you can spend the time to transpose it to another key.

But when you’re starting, you don’t want to be bogged down by finding notes and chords. You want to be able to move quickly.

So start in a key you’re comfortable with.

Again, when you’re first starting out you don’t have every variation memorized, so it’s best to start with the things you know well.

In this case, triad chords in root position.

That’s because most beginners will have an easier time structuring an outline of their progression using basic triads in root position.

You won’t have to think as much when trying different combinations.

The important thing here is to build up your muscle memory so you’re able to build any triad without thinking about it.

Once you’re happy with the general sound/vibe, you can mess around with inversions and voicings to make your hand movements more smooth.

Again, build up that muscle memory.

Once you’ve got a basic idea going – you have the general chords you want to use and their order – you can now start to experiment with complexity.

Since you’re vibe is basically set now, you can start to complicate the overall emotion listeners will feel by using chord extensions or advanced chord qualities.

Throw in some 7ths and 9ths. Try out a sus chord.

And now work on the rhythm. is it a ballad or an upbeat song? Experiment with different note lengths until you’re happy.

You Don’t Have to Be Conventional

Although it’s really helpful to follow conventional rules about diatonic harmony when starting, don’t think you have to stop there.

You don’t HAVE to always start on the root note (i.e. the I chord).

And you don’t have to ALWAYS stay in the same key. You can try borrowing chords from other keys.

For example, if you’re using a Eb minor chord in your progressions, try and see how the Eb MAJOR chord sounds in it’s place.

The only rule you NEED to follow is that it sounds GOOD to you.

It’s easy to start by building out a 4-chord chord progression. It’s a great way to get a starting point, and even writing your entire song around it.

But if you want to ramp up the complexity of your progression even more, stretch it out.

Say you want to use 8 total chords. Start by using 4 chords. Find places to use your primary chords (I, IV, V). Then play around with the seconday chords (ii, iii, vi, vii) in between those primary chords.

Once you’ve got a nice 4-chord progressions going, take your last chord (the 4th chord you’re using) and turn it into a “I” chord. And go from there.

The circle of fifths is a useful tool here, as it shows you the movement between keys in perfect 4ths and perfect 5ths.

Obviously this is a bit more advanced, but it’s can result in amazing emotional progressions that are unexpected and unique.

What Are Piano Chord Progressions?

Piano chord progressions are sequences of musical chords played on a piano one after the other, and sound good together – like they fit and tell a story. They provide the emotional mood of a piece of music. Progressions are used to develop a song’s harmony, which influences the “feeling” you get when you listen to it.

How Do I Practice Piano Chord Progressions?

The best way to practice progressions on the piano is to pick one that you like and memorize the pattern it’s built from (ex/ I -> V -> vi -> IV). Next, play that progression in one key, for example C Major a few times until it becomes easy. Next, try playing that same progression, in that same key but use inversions on some of the chords. Do that again until you’ve played as many versions of that as you can. Then move on to another key and do the same. Once you’re comfortable with that progression across all keys, move on to a different progression to practice.

What Are the Most Used Piano Chord Progressions?

There are several very popular piano chord progressions that exist in music. That’s because they’re beloved by both audiences and writers alike. They just work and sound great. One of the most used progressions in pop music is the I – V – vi – IV progression. In fact, it’s known as the “pop progression.”

Use these tips for writing your own to create amazing emotional pull in your next song.

Spend some time on it and it’ll pay off, as it’s the foundation of the rest of your song’s vibe. Now go learn more about how to use what you’ve just learned in piano practice sessions.

If you’re looking for a great online piano lesson with more structure, check out Playground Sessions, the Melodics Training App, Piano For All or Piano Marvel. Or read our guide on teaching yourself piano.

Thanks for reading our complete guide to piano chord progressions!

Back to Main Piano Learning Section